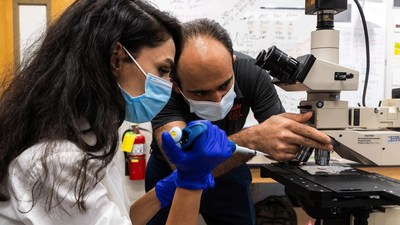 «As soon as the lab technician puts the sample drop on the transistor surface … the result is evident.»

Scientists and engineers at Auburn University believe so.

«We have developed an electronic device based on two-dimensional materials that are modified with antibodies so that it can immediately detect the virus spike protein,» said Masoud Mahjouri-Samani, assistant professor in electrical and computer engineering at the Samuel Ginn College of Engineering. «When the virus spike protein interacts with the antibody within the testing device, it impacts the electronic properties of the atomically-thin monolayer 2D material. As soon as the lab technician puts the sample drop on the transistor surface, the device responds, and the result is evident.»

Why is this important? Not only for peace of mind, but patients designated as COVID-19 positive at official testing sites would have an opportunity to seek treatment sooner rather than later when inexpensive sensors such as these pass clinical trials and become ubiquitous.

The study, «Two-Dimensional-Material-Based Field-Effect Transistor Biosensor for Detecting COVID-19 Virus,» explains how two-dimensional field-effect transistors, or those that use an electric field to control the flow of current in a semiconductor, are more expedient than the conventional 3D systems owing to their high surface to volume ratio. The paper was published by the American Chemical Society ACS NANO, a recognized leader in publishing nanoscience and nanotechnology research.

«The antigen tests are the current rapid on-the-spot screening tests that detect proteins in the virus and deliver results within tens of minutes when the viral load is generally highest,» Hasim said. «The developed electronic sensors enable much faster detection of samples with much lower viral loads.»

How does it work? The team established the fabrication of two-dimensional field-effect transistor biosensors using monolayer tungsten diselenide crystals for the detection of COVID-19 spike proteins. Transistors were fabricated using manufacturing processes common to integrated circuit technologies to define contact electrodes on the 2D crystals, combined with ionic liquid gating. The 2D crystal surface was then functionalized with the SARS COVID-19 antibody as the sensing platform. The sensors were successfully tested for various spike protein concentrations down to 25 femtograms per microliter, analogous to 1 gram of sample in 40 million liters of water.

«The device itself is a microchip,» Hamilton said. «That’s the beauty of it. The active channels of this device are smaller than the diameter of a human hair, and it can be shrunk even further. The sample to be tested will be larger than the device itself.»

Hamilton noted that such a device doesn’t have to be limited to COVID-19, but can serve as a detector for many other viruses.

«One of the great advantages of the device is that it’s extremely portable and you can develop arrays of devices with a variety of functionalizations for testing,» he added.

Mahjouri-Samani hopes his team’s findings have the opportunity to make an impact, but recognizes such a process would include a series of approvals and trials before distribution.

Kuroda noted that great scientific advancements were made within materials development in the 20th century.

«But this century is already different,» he said. «This century’s scientific advances are blending the knowledge in the realm of materials, physics, electronics and manufacturing, with other disciplines such as information, biological and health sciences,» he said. «The fact that we’re identifying means to exploit this in ways that are useful to society, while being more effective and less expensive, is a great contribution.»