IRONDALE, Ala., Aug. 10, 2021 /PRNewswire/ — Michael P. Warsaw, Chairman of the Board and Chief Executive Officer of EWTN, announced that EWTN will present its first annual Mother Angelica Award in a ceremony that will be televised August 15, the Solemnity of the Assumption and the 40th Anniversary of EWTN’s launch. 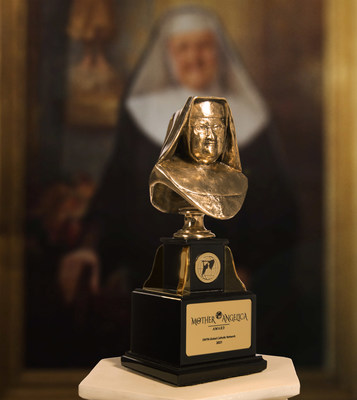 «Faith is one foot on the ground, one foot in the air, and a queasy feeling in the stomach.» – EWTN’s Mother Angelica

«Not long after Mother’s death, I felt very strongly that there needed to be some recognition, created in her name, that would honor individuals who, by their lives and service, have advanced the cause of the New Evangelization, just as Mother did throughout her life,» Warsaw said. «Through the years, we’ve been blessed to have so many incredible people work with us, people who like Mother herself, have been witnesses to God’s Providence in all they have done in service to the Church. And so we created The Mother Angelica Award. This annual presentation will recognize individuals who, like Mother Angelica, seek to bring others to a deeper knowledge of God’s love and trust in His Providence.»

It was originally Warsaw’s intent to present this award last year during a live ceremony in which friends, and those whose lives have been touched by the winner, would be present. Unfortunately, these plans were derailed by COVID.

Warsaw was undeterred. «As a television network, we will be able to present the award to its first recipient in a televised ceremony that will reach more than 380 million television households in 150 countries and territories around the globe.»

The honoree of this first award will receive a bronze sculpture of Mother Angelica, which was commissioned from Artist Kelly Somey of Asheville, N.C. Before beginning the project, Somey wanted to learn more about his subject. But it wasn’t just through books about Mother’s life and interviews with those who worked with her that this happened.

«This project has been impacted by the pandemic,» Somey said. «[Metal] foundries were closed…There were shortages of supplies. There were moments when I thought, «This is just…It’s not going to happen.» But Somey says he felt Mother Angelica was with him. «I felt that voice of Mother Angelica saying, «Hey Kelly, these are some hard times…I know you can get through this. This is something that I’m helping you with…» and I thought that was rather unique. That’s not something that I’ve experienced a whole lot.»

The project affected Somey more than he thought it would. «It’s through sculpting Mother Angelica, I’ve come to know a little bit more about her spirituality, her kindness, her inner beauty, her courage, the courage to found and guide EWTN. Those were things that took a very strong-willed individual, and those strengths, in my opinion, could have only come through God. And some people have commented to me along the way, that Mother Angelica had a little bit of, not just spirituality, but spirit. She was a little bit strong-willed, and I think that those are admirable qualities. As an artist, we have to be strong-willed as well, to try to complete works that are worthy of being created.»

As EWTN’s viewers know, Mother Angelica trusted completely in God’s Providence in everything she did, particularly in the founding of this Network. She famously said: «You want to do something for the Lord…do it! Whatever you feel needs to be done, even though you’re shaking in your boots, you’re scared to death – take the first step forward. The grace comes with that one step and you get the grace as you step. Being afraid is not a problem; it’s doing nothing when you’re afraid. ….You know what faith is? Faith is one foot on the ground, one foot in the air, and a queasy feeling in the stomach.»

Tune in Aug. 15 to discover who is honored with the very first award!

In its 40th year, EWTN is the largest religious media network in the world. EWTN’s 11 TV channels are broadcast in multiple languages 24 hours a day, seven days a week to over 350 million television households in more than 145 countries and territories. EWTN platforms also include radio services transmitted through SIRIUS/XM, iHeart Radio, and over 500 domestic and international AM & FM radio affiliates; a worldwide shortwave radio service; one of the largest Catholic websites in the U.S.; electronic and print news services, including Catholic News Agency, «The National Catholic Register» newspaper, and several global news wire services; as well as EWTN Publishing, its book publishing division.