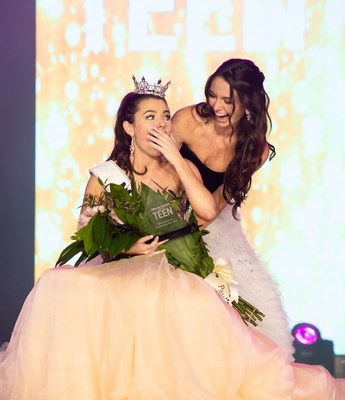 Candidates represented 50 states and the District of Columbia to compete for the title of Miss America’s Outstanding Teen. Competition culminated with a live final event featuring all 51 competitors and spotlighting 11 semi-finalists. Over $100,000 was awarded in cash scholarships.  In-kind scholarships from seven universities in the amount of $30 million were made available to all 51 candidates.

Miss LeBlanc, age 18, attends Laurel Springs School. For her talent presentation, she performed «On My Own» from the Broadway Classic Les Miserables. She developed the social impact initiative S.T.A.R.S. – Supporting the Arts Through Resources & Scholarships. An accomplished actress, she has appeared in several major film and television productions including Stranger Things and intends to continue her career as a professional actress while pursuing a degree in accountancy.  In addition to a $30,000 scholarship, she was awarded $500 for top overall interview, and $500 for talent in preliminary competition.

A $4,000 scholarship was awarded to second runner-up, Miss Texas’ Outstanding Teen, Katherine Omo-Osagie. In addition, she received $500 for eveningwear and on-stage question during preliminary competition.

Third runner-up and the winner of a $3,000 scholarship was Miss Georgia’s Outstanding Teen, Megan Wright. She was awarded an additional $500 for eveningwear and on-stage question during preliminary competition.

The winner of a $2,000 scholarship and fourth runner-up was Miss Nebraska’s Outstanding Teen, Jamie Rose Chen.

«We are delighted to partner with the Miss America Organization to help provide a stage and support for these amazing young women to pursue their dreams,» says Karen Noseff Aldridge, Founder and President of Rebel Athletic, Inc., presenting sponsor of the event. «Rebel believes in inspiring, championing, celebrating, connecting and amplifying the next generation of young women change-makers—which is why this partnership with the Miss America Organization is so perfect.»

ABOUT Rebel Athletic, Inc.: Karen Noseff Aldridge founded Rebel Athletic in 2013 with a vision to bring couture design and more sparkle to the world of cheerleading apparel. Since then, Rebel has spread this vision of a «world with more sparkle» to competitive, school and pro-team cheer, dance, and mainstream athletic-wear. Rebel believes in giving girls a stage from which they can dent the universe, and have promoted Rebel Against Bullying as our platform, enabling anyone to be a positive influence in the lives of their family, friends, community and the world. https://www.rebelathletic.com/